Delayed differential equations (DDEs) can be implemented in a block EQUATION:  of the section [LONGITUDINAL]. For that, the function delay is proposed. This function allows to delay a dynamical variable by a constant time. One can also build a model with several delays. Delays in the absorption after drug administration must be implemented using the keyword Tlag in the administration macros.

Example
We consider in this example a first order delay differential equation on x defined by:

This DDE is typically an accumulation process with a delayed linear elimination treatment. This model is implemented in the file mlxt_dde.txt:

The result of the simulation is performed by Mlxplore using (V=10, k=0.5, k=.25, tau=2) and is proposed on the following figure. The interesting part in this example is that the delay has an important impact on the stability of the system. This kind of systems can thus be explored by Mlxplore. 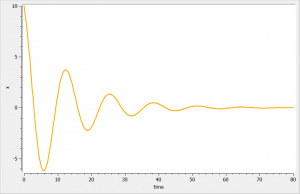