Some drugs can display complex absorption kinetics. Common examples are mixed first-order and zero-order absorptions, either sequentially or simultaneously, and fast and slow parallel first-order absorptions. Multiple peaks in concentration-time curves can also be described with mixed absorptions, and can be explained by different physiological processes, such as enterohepatic recycling, delayed gastric emptying, or variability of absorption.

In most cases, a two mixed absorptions are sufficient to capture the main features of the absorption.

We have developed a library of double absorption models implemented in Monolix to take into account all the combinations of absorption types and delays. The absorptions can be specified as simultaneous or sequential, and with a pre-defined or independent order. This library simplifies the selection and testing of different types of absorptions and delays.

In this documentation we detail the filtering options in the interface of Monolix, shown on the figure below, and the corresponding parameters and modelling choices.

The choices for the first absorption are:

The choices for the second absorption are:

Finally, just like for the PK library, the remaining choices are:

The PK double absorption library contains many models, because of the many combinations of absorption types and delays for both absorptions, constraint on the time of the second absorption, distribution and parameterizations. In total 418 model files are available. The file names follow the pattern below: 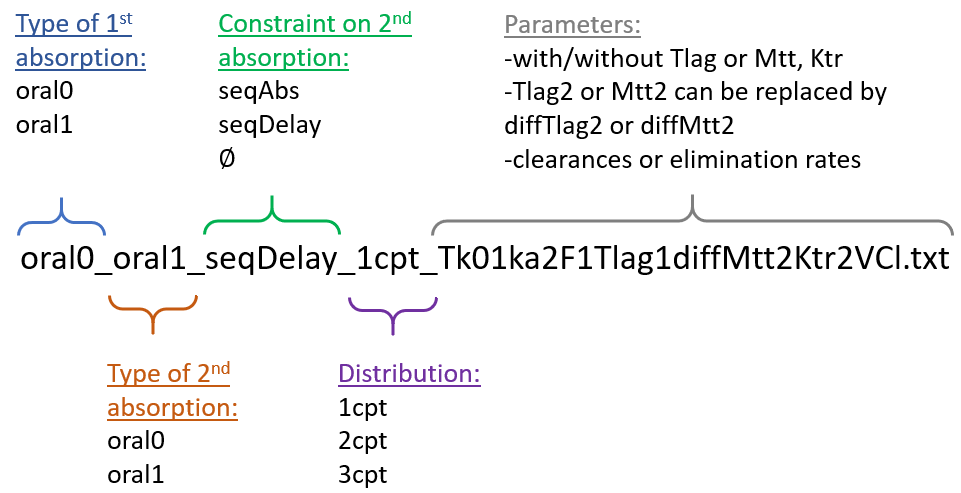 The models are written with PK macros.

Other examples are available on this page.

A case study presenting a step-by-step modeling workflow for the PK of veralipride, using models from the double absorption library is available.