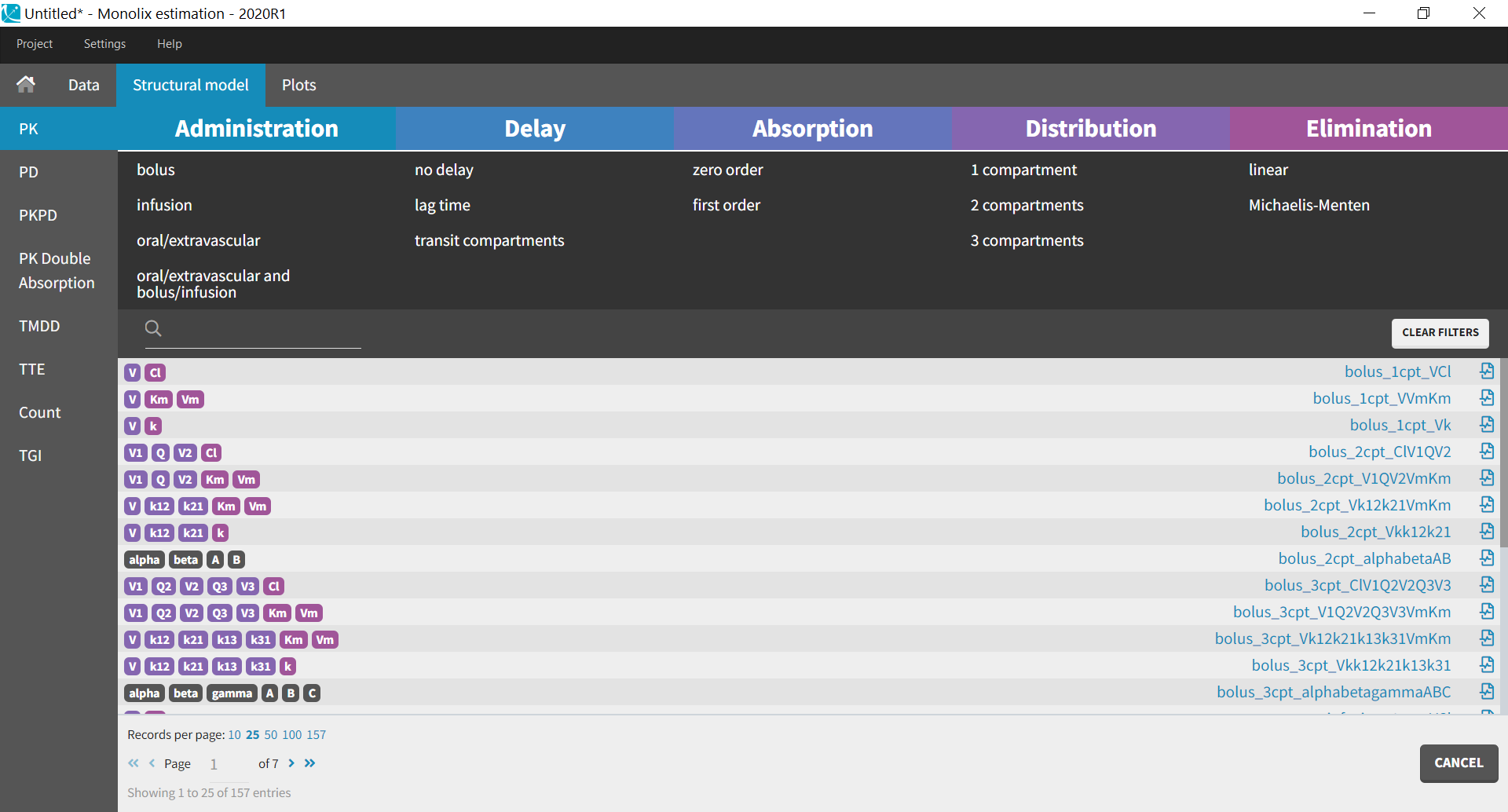 All PK models in the library correspond to a system of equations with the following structure:

The equations express the concentration \( C_C(t)\) in the central compartment at a time t after the last drug administration:

To explore the differences in administration routes, we will see how they impact the input rate of a model with 1 compartment and linear elimination, parameterized with the clearance.

The ODE system for this model is:

The intravenous bolus is an injection which quickly raises the concentration of the substance in the blood to an effective level. When bolus is selected, if \(D\) is the dose administered at time \(t_D\), we set the amount in the central compartment to \(A_C(t_D) = D\). This is equivalent to modeling the input rate as a dirac \(In(t) =\delta_{t_D}D \).

The response in the central compartment to a bolus in case of a model with 1 compartment with linear elimination is a decreasing exponential: 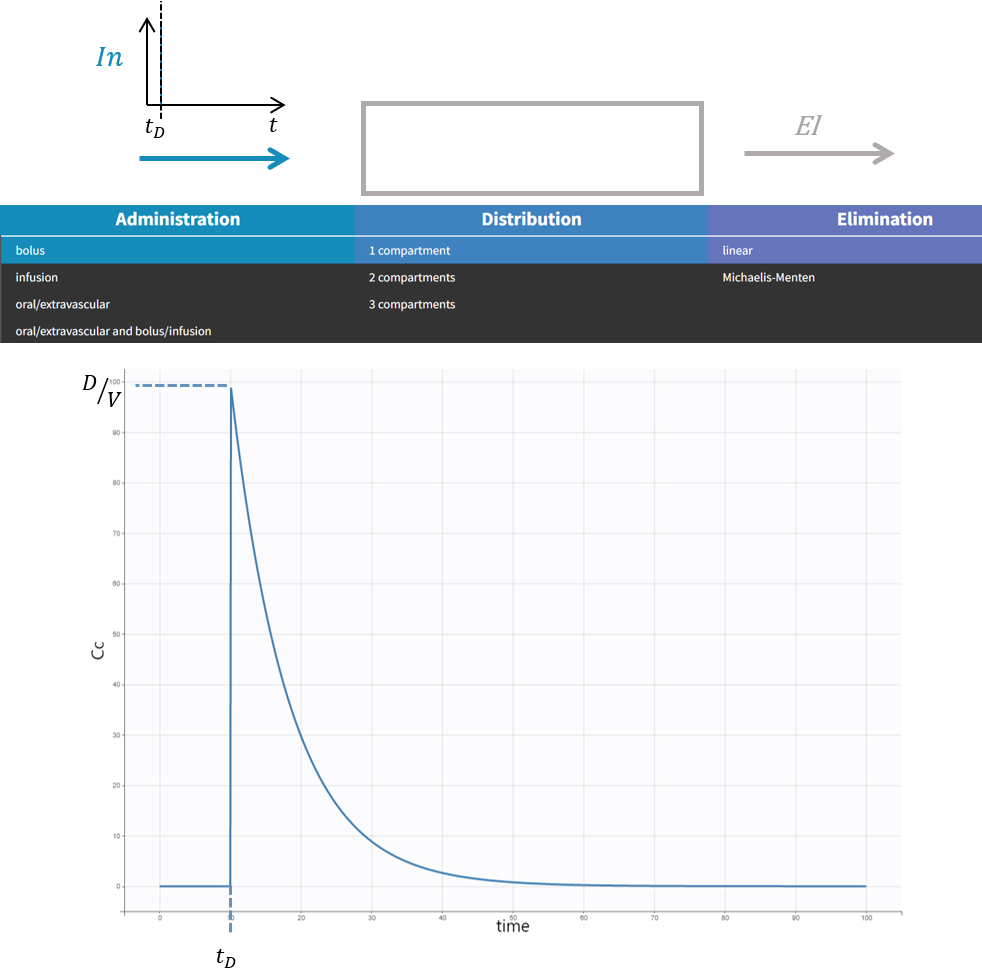 This section focuses on intravenous infusion. For subcutaneous infusions, check the dedicated subsection in the oral/extravascular section.

To have the input modeled as an infusion instead of a bolus, you need to have a column tagged as ‘infusion rate’ or ‘infusion duration’ in your dataset in Monolix (the duration will be deduced from the amount and rate columns if rate is specified, and vice versa). In Simulx, you need to create a treatment element that is an infusion. 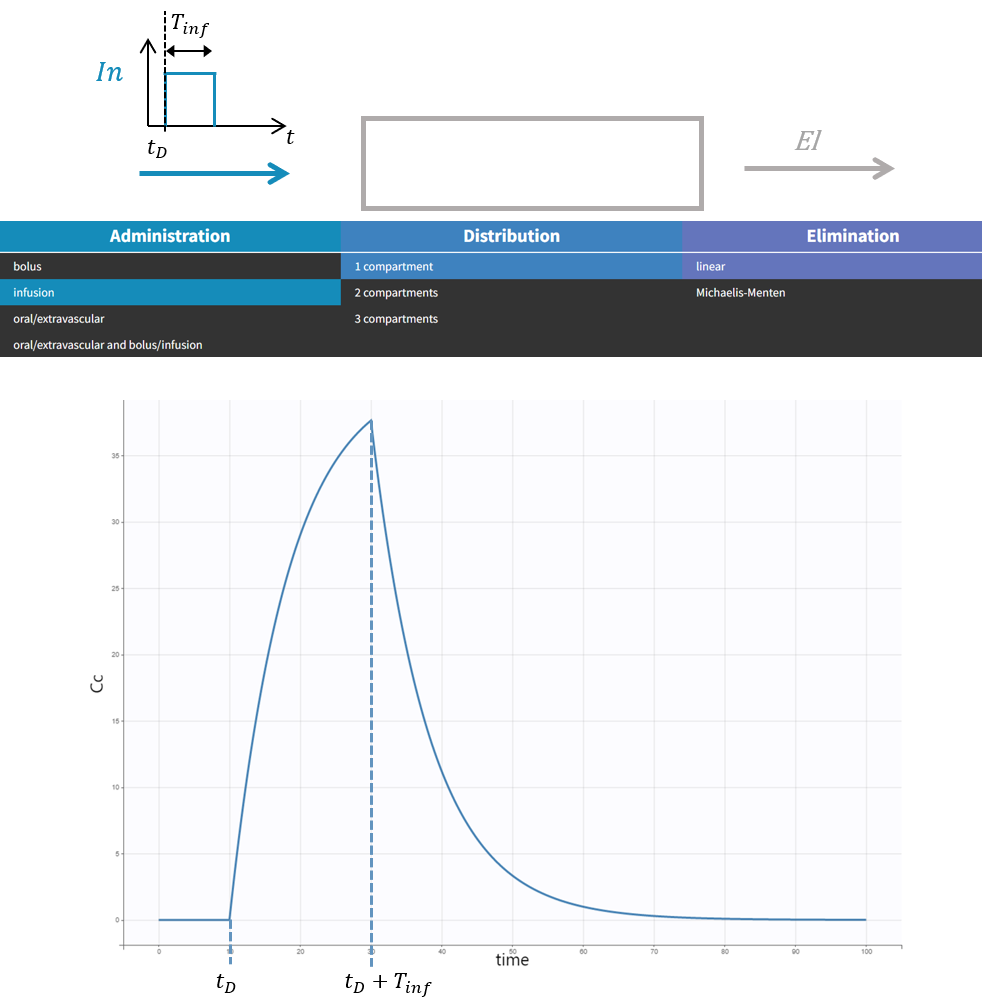 Note that bolus and infusion models are encoded exactly the same way with the pkmodel macro. It is the pkmodel macro that will check if a column tagged as INFUSION RATE or INFUSION DURATION appears in the dataset, and if this is the case, use the analytical solution of the infusion equations instead of the bolus equations.

In the case of an oral or extravascular administration, you have additional options for delay and for the type of absorption.

The type of absorption will determine if the peak in the response is sharp or smooth.

A zero-order absorption is modeled with the same input rate as for an infusion, i.e. with a square pulse input, with 2 differences:

A first-order absorption will instead correspond to a sharper input pulse with a slow exponential decay which depends on the absorption rate. Because of this, the response peak is smoother. This input rate is the analytical solution of a system with a depot compartment where the dose would be added at time \(t_D+T_{lag}\), and which would be transferred to the central compartment with an absorption rate \(k_a\):

We compare here zero and 1st order absorption in the case of a lag time, but if there is no lag in the response, the no delay option can be selected and the parameter \(T_{lag}\) will disappear. 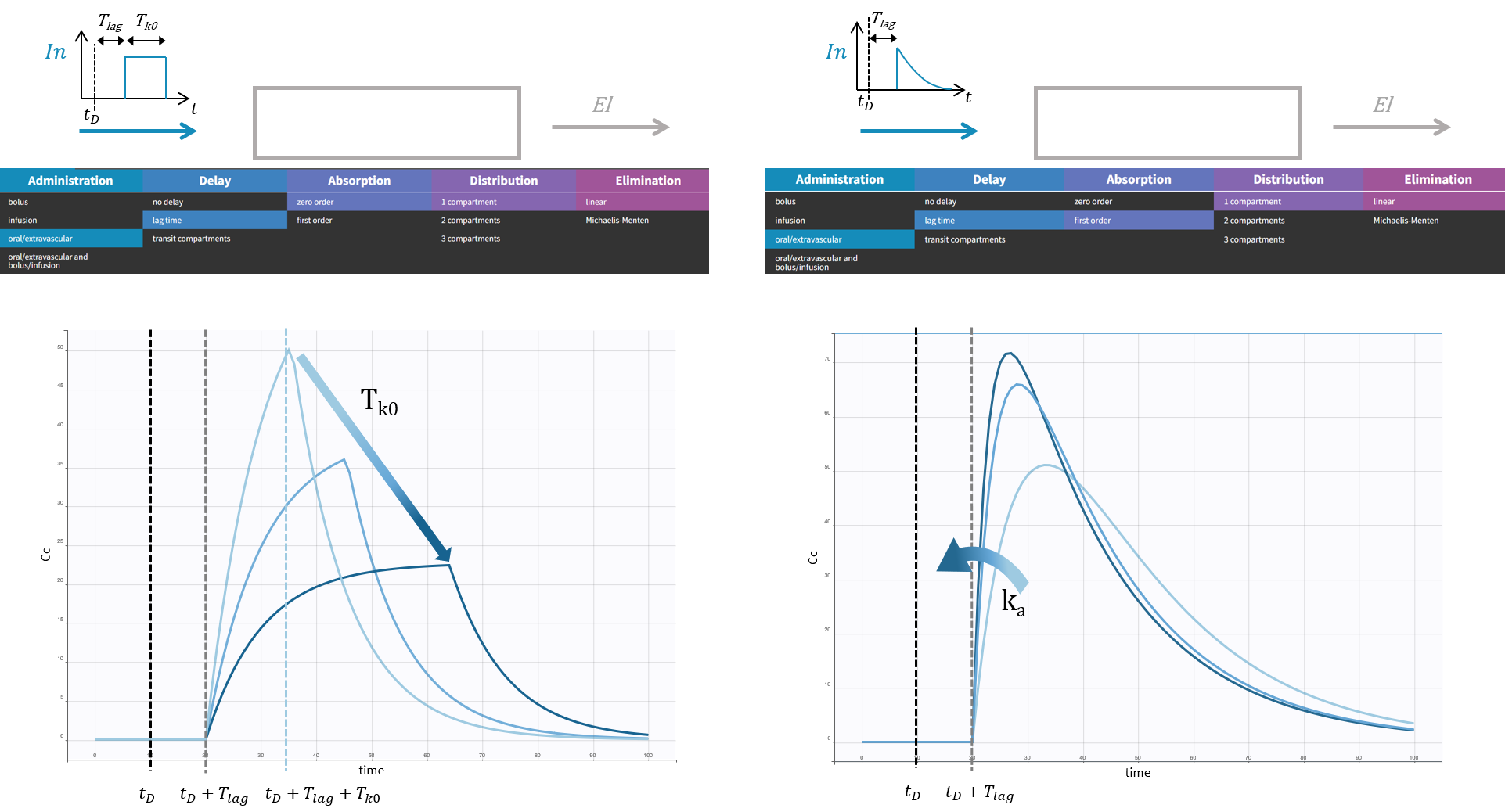 The input rate is the solution of the following system: 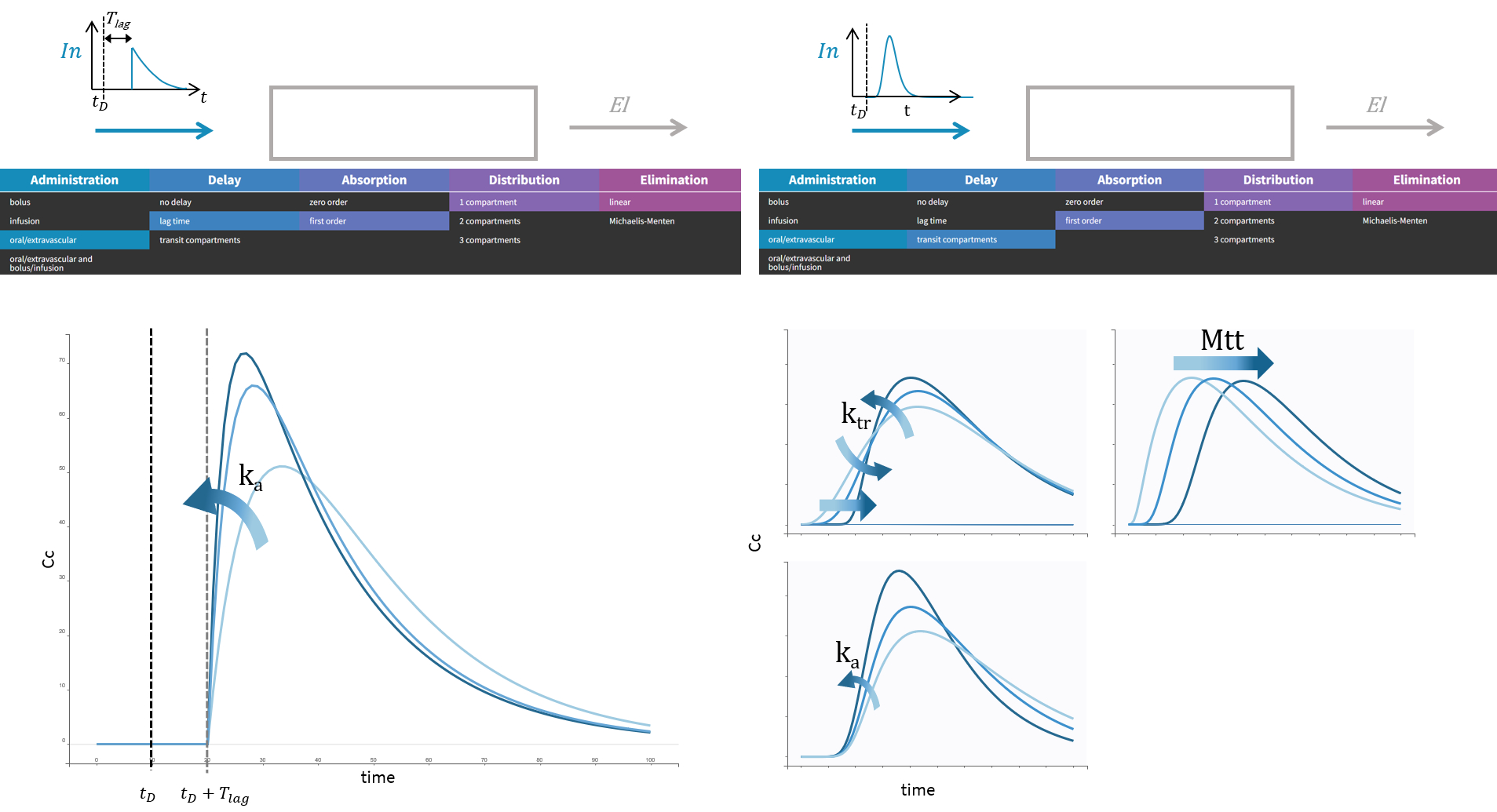 To have the input modeled as a subcutaneous infusion, you need to

Only 1st-order absorption is available in this case, and the input rate in case of Tlag (or no delay, i.e. Tlag = 0) is the solution of the following subsystem, combining the equations described above for infusion and for first-order absorption:

In practice, most of the time the two administrations are not simultaneous and the rate takes in turn the value of a rate for an infusion/bolus and for an oral administration, according to the dosing times in the data set.

For each of the combined models, there is a possibility to incorporate the bioavailability by selecting the model with parameter F. This will multiply the oral/extravascular administration input rate by the number F. We give this possibility only in case of multiple administration routes because in a single route setting, F and V would only appear in the ratio \(\frac{V}{F}\) which makes them non-identifiable.

The input rate defined by the administration route impacts the amount of drug in the central compartment. You can select to have additional peripheral compartments leading to a system with 1, 2 or 3 compartments in total:

The ODE system for each case is given here, parameterized by the volumes in each compartment \(V_1, V_2, V_3\) and the intercompartmental clearance Q. 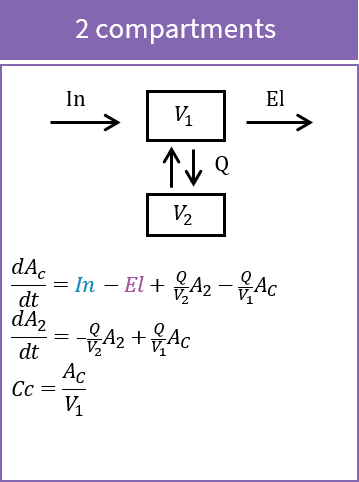 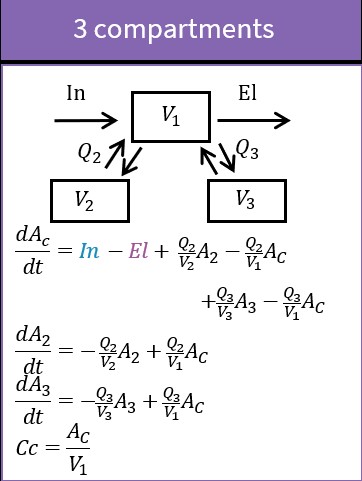 \(In\) and \(El\) rates are defined by the selected administration route and the elimination rate.

To show the impact of the number of compartments, we will see how they impact the response of a model with a bolus and linear elimination, parameterized with the clearance.

Impact of parameters in the case of 1 compartment

In the case of 1 compartment, the ODE system for a bolus with linear elimination parameterized with the clearance for \(t \ge t_D\) is:

The response is given by a decreasing exponential \(\log(Cc) = \log(\frac{D}{V})-\frac{Cl}{V}(t-t_D)\). If the elimination rate \(\frac{Cl}{V}\) is kept constant (to focus on the effect of the distribution parameters), increasing the volume V will translate the whole response down: 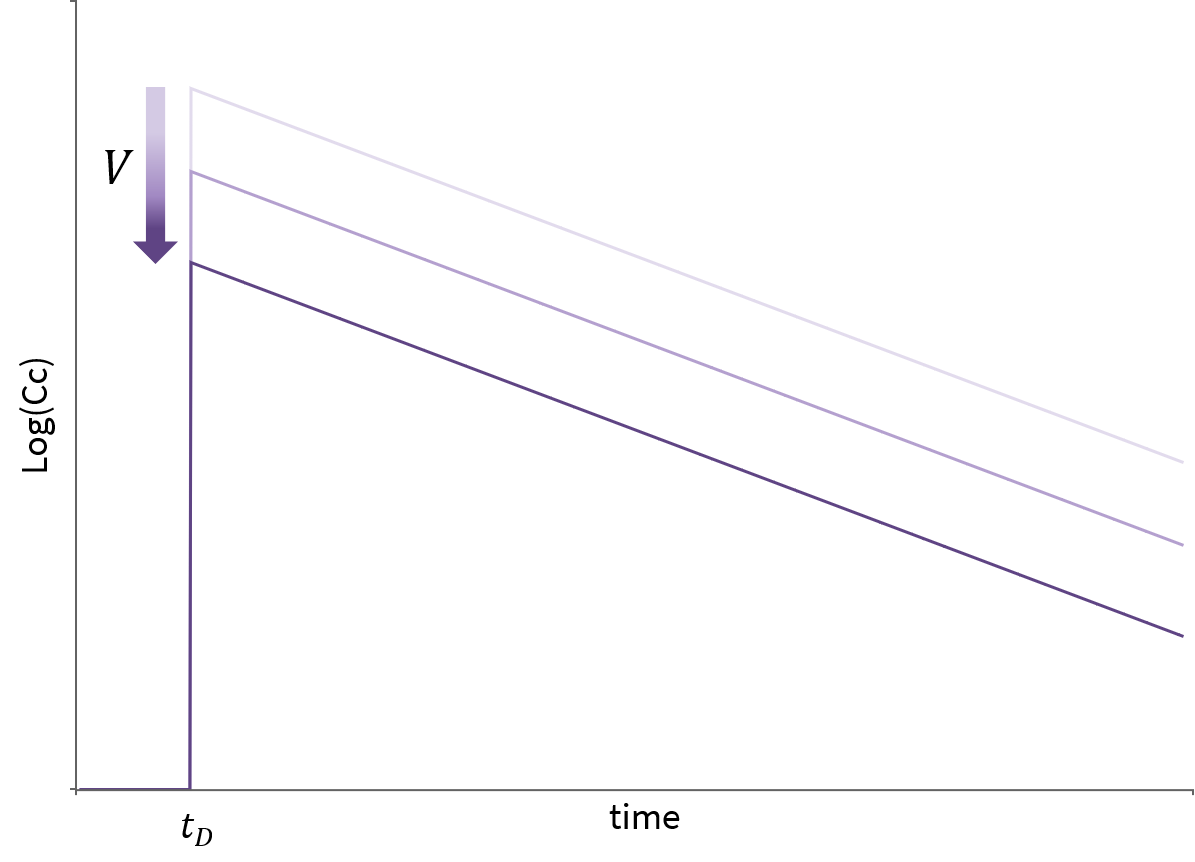 Impact of parameters in the case of 2 compartments

In the case of 2 compartments, the ODE system for a bolus with linear elimination leads to a response involving a sum of decreasing exponentials such that \(\log(Cc)\) shows 2 different slopes. Increasing \(V_1\) makes the response start lower, increasing \(V_2\) decreases the value at which the slope changes, and increasing \(Q\) moves this point earlier, making the slope change also sharper. 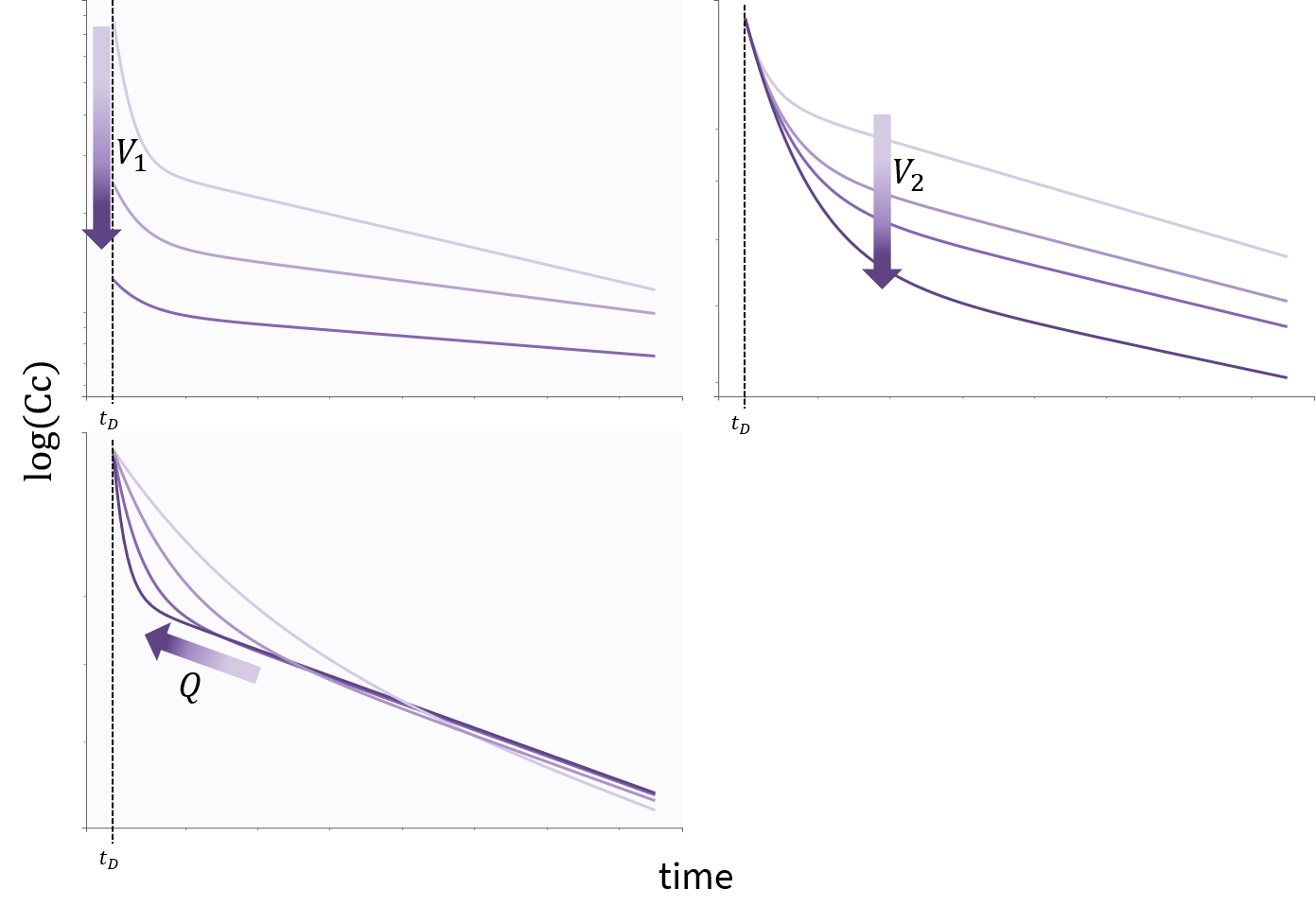 Impact of parameters in the case of 3 compartments

The case of 3 compartments is similar to the case of 2 compartments. \(\log(Cc)\) shows 3 different slopes. \(V_1\), \(V_2\) and \(Q_2\) influence the early dynamics by playing on the initial value, and on the time and height of the first point of slope change. \(Q_3\) and \(V_3\) influence the later dynamics by playing on the second point of slope change. 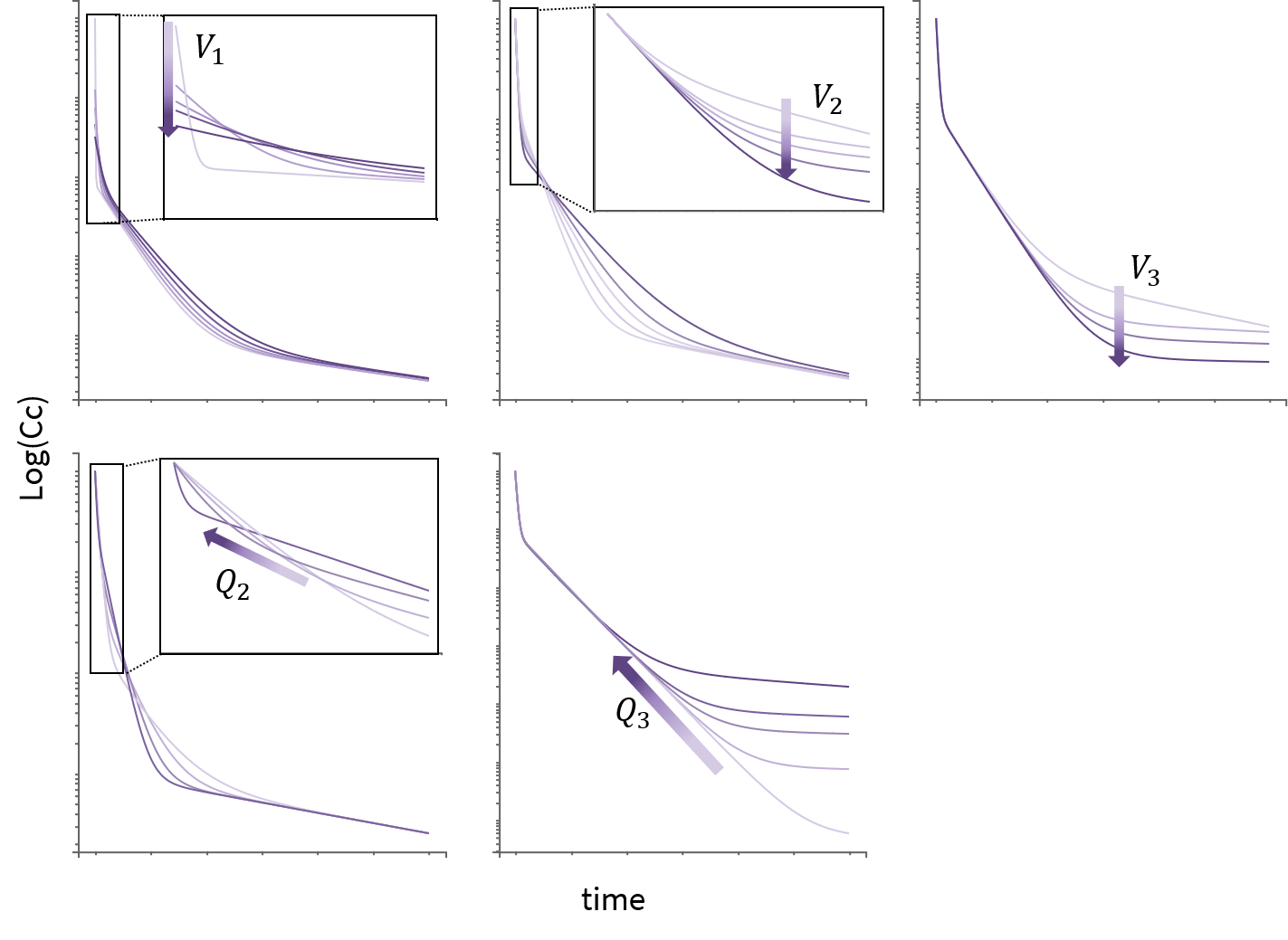 The elimination rate denoted in the previous section as \(El\) can be either a linear rate involving the clearance \(Cl\), or a Michaelis Menten rate involving the constants \(K_m\) and \(V_m\). Another possible parameterization for the linear rate is using the elimination rate \(k = \frac{Cl}{V}\). To visualize the difference in the response, we show below the response of a 1-compartment model to a bolus in the two cases.